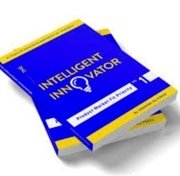 For Game-Changing innovation, our cardinal insight came on the 15th of April 2015. It is now nearly four years later …

During 2014, Anthony Nathan (former client and a close friend of mine) had started commercializing new game-changing technologies. I thought some of the innovations were absolutely amazing, but from our conversations it became clear that it is far easier said than done. He kept asking me: “Why is it so difficult to get people to see the value of a game-changer?” He explained to me, how he had developed into a thick-skinned sales person that would go around the world kicking down doors. Every single sale was painful. At one stage he told me: “The bigger the game-changer, the more difficult the sell!” I had no answer.

The morning of the 15th of April 2015, I was scanning over some old Theory of Constraints educational material developed by Dr Eli Goldratt (father of the Theory of Constraints and long-time colleague) on the ‘reason for technology’. One specific statement Dr Goldratt made caught my eye. The statement was: “Technology is necessary but not sufficient, the market must adopt the new rules to realize the full benefit”. I immediately knew this statement would somehow explain Anthony’s challenge.

From that moment on, I wanted to understand Dr Goldratt’s statement much deeper, because it clearly stated that the full value of technology does not come directly from the technology itself, but more from the market adopting the new rules. Wow, this could be big – the real MARKET VALUE is only realized through the NEW RULES and not directly from the TECHNOLOGY itself.

A simple example further convinced me, that we might be onto something. In 1717 a guy by the name of Daniel Fahrenheit invented the thermometer (the controversial tool was a glass tube used to measure body temperature). Daniel offered his game-changer to doctors to assist them with the challenge of assessing if a patient had a fever or not. Only a few early adopters thought it could be of use, but they failed to convince the masses.

For nearly a hundred years, doctors were generally reluctant to use the glass tube. Why? A French doctor Jean Charles Grimaud captured the prevailing view and rule, when he argued that the doctor’s touch captured information much richer than any tool. In other words, using the thermometer suggested incompetence on the part of the doctor. Today, doctors no longer rely on touch and not using the thermometer rather, suggests incompetence. It took nearly a hundred years for the market to figure out the new rules before the market would adopt it. From Dr Goldratt’s statement, I realized that if you present your game-changing technologies (features and benefits) without suggesting the new way and rules, you would experience a very slow adoption.

I decided to drive to Anthony’s place, to share my discovery face to face. I took a photo of my notes and decided to think about how to present it, on the way there. Arriving, I wasn’t 100% sure how to approach it, and started by explaining to him, that long before the new game-changing technology arrived, the market was coping just fine. That the market was not waiting in great anticipation for the new technology. That markets develop ways of life or work to accommodate for the challenges they are facing.

I also shared with him Fahrenheit’s story, and how the doctors faced an insurmountable challenge of having to assess if a patient had a fever or not, without clear tell tail signs or recordable evidence. To accommodate for this challenge, they developed and adopted over time the skill to assess for a fever, through touch. At least, he did not disagree.

I told him that the market is in love with their current ways and rules, and understand well, the value they are realizing as a result. For example: the doctor’s touch played an important part in making the doctor almost indispensable. You now come along, and show them your new game-changing technology, that can easily overcome the challenge they were facing, but then you do not readily suggest the new way and rules that they will have to adopt, before they will be able to realize the new value.

Instead you focused them on the direct features and benefits of the technology itself. The market now judges your new product through the eyes of their old way and rules. No wonder adoption of game-changing innovations is usually a slow and painful process.

Four years later and with more than 300 cases; we have codified the subject of game-changing innovation into the relevant first principles, methods and applications, to reliably guide innovators on how to accelerate market adoption.

This site uses cookies. By continuing to browse the site, you are agreeing to our use of cookies.

We may request cookies to be set on your device. We use cookies to let us know when you visit our websites, how you interact with us, to enrich your user experience, and to customize your relationship with our website.

Click on the different category headings to find out more. You can also change some of your preferences. Note that blocking some types of cookies may impact your experience on our websites and the services we are able to offer.

These cookies are strictly necessary to provide you with services available through our website and to use some of its features.

Because these cookies are strictly necessary to deliver the website, refuseing them will have impact how our site functions. You always can block or delete cookies by changing your browser settings and force blocking all cookies on this website. But this will always prompt you to accept/refuse cookies when revisiting our site.

We fully respect if you want to refuse cookies but to avoid asking you again and again kindly allow us to store a cookie for that. You are free to opt out any time or opt in for other cookies to get a better experience. If you refuse cookies we will remove all set cookies in our domain.

We provide you with a list of stored cookies on your computer in our domain so you can check what we stored. Due to security reasons we are not able to show or modify cookies from other domains. You can check these in your browser security settings.

These cookies collect information that is used either in aggregate form to help us understand how our website is being used or how effective our marketing campaigns are, or to help us customize our website and application for you in order to enhance your experience.

If you do not want that we track your visit to our site you can disable tracking in your browser here:

We also use different external services like Google Webfonts, Google Maps, and external Video providers. Since these providers may collect personal data like your IP address we allow you to block them here. Please be aware that this might heavily reduce the functionality and appearance of our site. Changes will take effect once you reload the page.

The following cookies are also needed - You can choose if you want to allow them: